2001 - present
Phil Keoghan is the host of the original American version of The Amazing Race.

Emmy Award-nominated host, Phil Keoghan, has experienced a life full of travel and adventure. He started traveling around the world at the age of two and has been globetrotting ever since. Serving as host and a producer of CBS's multi Emmy Award-winning reality series, The Amazing Race (US), Keoghan continues to travel at a pace few could match.

After surviving a near death experience at the age of 19, where he found himself lost at 120 feet inside a 22,000 ton ship wreck, Keoghan was prompted to write a list of things to do before he died. For more than 20 years, he has lived this Life List in front of a TV camera working in more than 100 countries as an actor, author, television host, producer, and cameraman.

Some of his adventures include having a five star meal on top of an erupting volcano; changing a light bulb on top of Verazano bridge; breaking an unofficial bungee jumping record with eight others; swimming from Asia to Europe across the Bosporus; and putting a golf ball across Scotland. Most recently, he rode his bike from Los Angeles to New York City to help raise awareness for the National MS Society. Keoghan filmed the grueling 3,500 mile adventure and turned it into a documentary film titled "The Ride".

Phil's challenging Life List evolved into his life philosophy and the title of his best selling book No Opportunity Wasted. The book was later developed into an award winning television series produced in the US, Canada and New Zealand.

With a passion to help others get the most out of life, Keoghan is a regular motivational speaker at colleges and major corporations throughout North and South America, Asia, New Zealand and Australia.

Phil lives in Los Angeles with his wife and daughter, Elle. According to his daughter, he has had at least 5 different accents in his lifetime.[1]

Phil is present at the start of each Season mentioning the number of legs, twist, and tells everyone to travel safely before telling the teams to go. Phil is present at the task, detours, and roadblocks explaining what the teams have to do before arriving. In earlier seasons, Phil would explain the pros and cons between the detours. Phil even explains where the Pit Stop is present at onscreen and in earlier seasons he would reveal that the last team to check-in will or may be eliminated. In more recent season Phil would say maybe eliminated to leave the audience in suspense if it is the elimination or non-elimination leg.

From Season 2 onwards, Phil is present in every Pit Stop and tells the Teams in what place they finish and explains the prize won to the team that arrives first. While waiting for teams to arrive at the Pit Stop, Phil gets informed by phone call or text by producers to know what the teams have done if something wrong happens. If a team forgot a clue or didn't do a task, Phil will tell the team to go back and do it before checking them in. Also if a team is missing their passport, Phil will turn them back to find it before checking them in.

The most times Phil turn a team back was in Leg 2 of The Amazing Race 19 with a total of eight teams. If a team broke a rule such as not following a clue, Phil will explain what they did wrong and give them a penalty before checking them in. When the last team arrives at the Pit Stop, Phil tells them that they are the last team to arrive.

Only in Season 1, Phil is only present at the Pit Stop when the last team arrives. If it is a elimination leg, he informs the team that they have been eliminated from the race. If the last team hasn't checked in yet and couldn't complete a task, Phil will head to their location and inform that all the other teams have already checked in and they have been eliminated.

In a non-elimination leg, Phil tells them this is a non-elimination leg. In some legs, Phil will reveal to the team that arrives first that the race continues by handing them their next clue. After checking a team in Phil would discussed with Teams in what happened during the leg before the team leaves.

During the last leg, Phil waits on the finish line with the eliminated teams and when the first team arrives at the finish line, Phil tells them how many countries, continents, and miles the team went and that they are the official winners of The Amazing Race and won the $1 million prize. He also congratulates the runner-ups for their success. During the Head-to-Head, Phil would watch, talk, and describe the players competing in the Head-to-Head.

At the Pit Stop, Phil doesn't mind when a team hugs him or shakes his hand except the time in Leg 5 of The Amazing Race: All-Stars, when Oswald & Danny had coal on them making Phil run from them chasing after him before being checked in.

During filming of season 33. Phil gathered every remaining team after the third leg. He told everyone due to the coronavirus, he told everyone the best choice is to suspend the race to ensure everyone is safe. 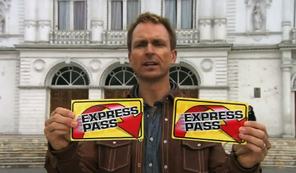 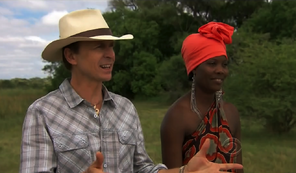 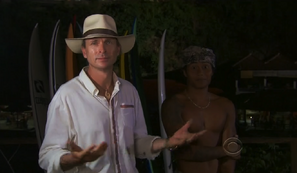 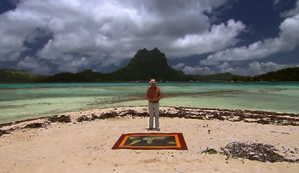 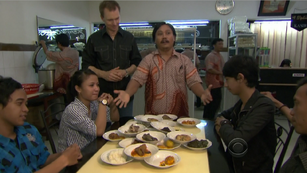 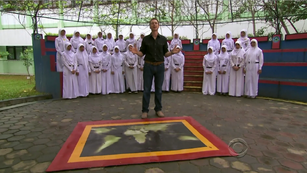 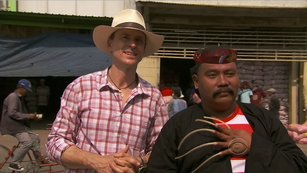 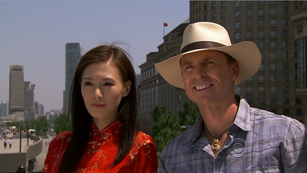 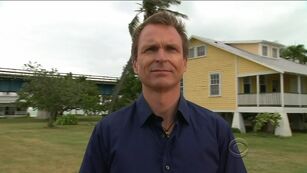 Phil Keoghan in the Opening credits.