The Amazing Race Canada is the twelfth (12th) international version to launch outside of the United States, joining Asia, Australia, Brazil, China, France, Israel, Latin America, Norway, Philippines, Ukraine and Vietnam as territories with an original The Amazing Race production.

Commissioned by CTV, The Amazing Race Canada was produced by Insight Productions in association with CTV and with the support of Profiles Television. Executive Producers for Insight Productions are John Brunton and Barbara Bowlby, and Supervising Producer is Mark Lysakowski.[1]

The cast of season one. 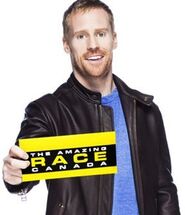 Add a photo to this gallery

Retrieved from "https://amazingrace.fandom.com/wiki/The_Amazing_Race_Canada?oldid=114499"
Community content is available under CC-BY-SA unless otherwise noted.